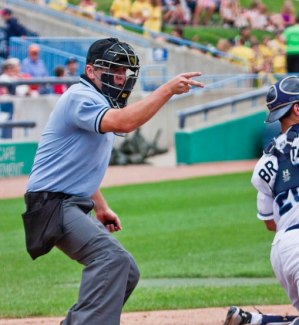 Without doubt, youth sport officiating can be a thankless job.  In fact, the old saying is that the good referees are the ones you don’t notice during the game — not the kind of positive reinforcement most people receive at their jobs.  Ironically, when referees miss or make bad calls, the reactions by spectators are often negative, mean-spirited, and even potentially dangerous.

Not the easiest job…

As fans, we sometimes forget how difficult the job of an official can be, resulting in inappropriate language (like yelling out insults at an official), or worse — physical violence.  Not only is it tough to make perfect calls all the time, the emotional component that accompanies the play on the field often prompts officials to make immediate calls, rather than having time to logically think through potential fouls and penalties on the field (and there’s no instant replay in youth sports, either).

Youth sport officials are sometimes under-valued and, sadly, only acknowledged when they make mistakes.  Add to the fact that officials often take on the job because of a love of the game and desire to help kids (and little to no pay), and you might appreciate their efforts even more when they receive such little reward for their hard efforts.  The truth is without sports officials, kids would not have the quality youth sport experiences we have come to expect.

Listed below are 5 ideas to help fans fairly judge the officials working youth sports this summer:

1. Hustle.  It is very reasonable to expect officials to hustle, and often the really good officials will end up more tired at the end of the game than the kids they officiate because of their hustle.  Officials who hustle usually get in the best position to make good calls, and also earn the respect of the athletes on the field when they miss a call because of the efforts they made to do their best.

2. Wrong call v. bad call.  Officials make bad calls all the time — even at the professional level.  A bad call is simply a product of being “human,” and is impossible to avoid in sports.  A wrong call, however, is when an official simply doesn’t know a rule pertaining to the game.  Wrong calls should be addressed promptly through league operators or commissioners so that the official can learn the rule(s) for the future.

3. Respectful to athletes and coaches.  Good officials show respect to both teams while remaining impartial calling the game.  In these examples officials who show respect use clean language, refrain from profanities, and are mindful of their body language so that it is not seen as sarcastic, condescending, or mean-spirited.

5. Respond to on-field injuries.  While it may be asking too much to expect officials to treat injured athletes on the field, they should at minimum have a working knowledge of what to do and who to contact when injuries occur.

There is a disturbing trend we are witnessing in this moment where youth sport officials are leaving the profession, and in almost every case these decisions have been based around unruly sport parents and/or verbal insults and physical aggression.  Remember, our kids have the best youth sport experiences when we have quality officials, and this only occurs when we protect officials from angry parents and threats of violence.  Take time out to thank your youth sports officials this summer and let them know you appreciate the efforts they make to help your child have a happy, productive, and successful sports career.