A Psychological Look at Losing the Mystique of Invincibility in Sports 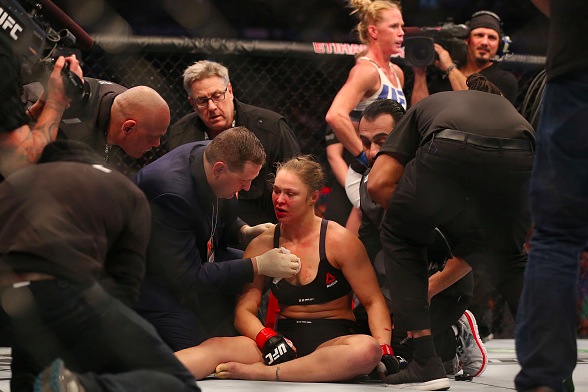 Ronda Rousey lost her first MMA fight this past Saturday to Holly Holm, creating a shock wave across the sports world.  Once thought invincible, Rousey was knocked out by Holm in the 2nd round of the fight, immediately making Rousey look like the rest of us again — human.  Of course, Rousey isn’t the first “invincible” athlete or team to lose, and she won’t be the last, but perhaps the real angle to the story is what happens after the cloak of invincibility is lifted?  How does the former unbeatable athlete respond, and what will be the reaction by the competition who now see opportunities where there were previously none?

A quick glance at famous, previously unbeatable athletes include Mike Tyson, the 1980 Russian hockey team, Tiger Woods, and countless legendary college, high school, and youth sport athletes and teams.  For many years, the US Mens Olympic basketball team was seen as unbeatable, then eventually lost.   Seeing a great champion lose really is nothing new, but it is always dramatic, and the implications can go a number of different ways.

Mike Tyson never quite found his groove again after losing to Buster Douglass, although he did briefly regain the championship in the years that followed.  The Russian hockey team faded back to being a premier — not unbeatable — team, and Tiger Woods really hasn’t been anything close to his old self before his marital transgressions took him away from golf for over a year.  And now it’s Ronda Rousey’s turn and the world eagerly awaits to see what will happen next.

For Rousey, she’ll first need to take time away from the octagon and ask some serious questions, including her fight plan against Holm, her level of conditioning, and whether she really fought up to her potential.  Additionally, Rousey will need to think long and hard about her future and whether she can regain the hunger that once propelled her to become champion of the world.  Remember, Rousey’s loss was just as much a wake up call to her as it was a shock to the rest of us, so she will need a little time for the dust to settle in order to process what just happened.

The fascinating dynamic in play is not only how well Rousey rebounds, but the impact it will have on her competition.  Similar to how the field in golf began to see Tiger Woods as beatable, Rousey will also be viewed this way, meaning the competition will come in “fighting to win,” rather than “fighting to avoid losing.”  This is a huge sport psychology difference in mindsets, and often the difference between winning and losing.

Rousey, similar to other great champions before her, hasn’t completely lost all of her talents and abilities.  Her future success will rely on how bad she wants success again, and if her heart is still into doing everything necessary to become champion.  Part of this process is becoming honest with herself, looking at what happened objectively and critically, and being open to making changes necessary for the future.  If she is unwilling (or unable) to do these things, the road will be long and the odds for future success will be minimized — but if she uses the loss to refocus and regain the fire she once had, she has every opportunity to regain the championship belt again.