Analyzing the Effectiveness of Colin Kaepernick’s Protest a Year Later 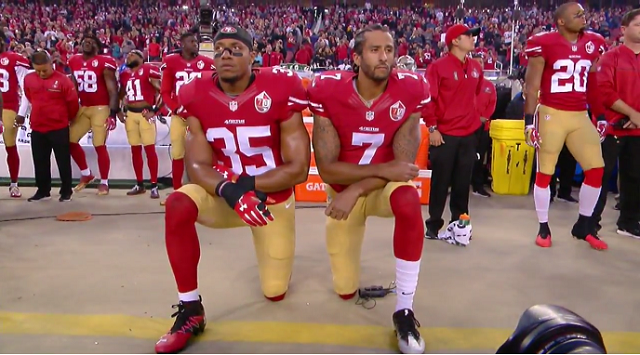 NFL quarterback Colin Kaepernick made national news last fall when he took a knee for the national anthem, a move that prompted other athletes to follow suit and ignited a national debate around police brutality and unjust situations in our country.  The kneeling movement picked up a lot of steam, and even got athletes from sports other than football to follow suit.  In fact, Kaepernick’s protest was such a big news story that it even triggered college and high school student athletes to kneel, including men, women, boys, and girls, as well as people from various cultural, ethnic, and racial backgrounds.

Now, as we near the one-year anniversary of Kaepernick’s first protest kneel, the QB has stated that he will no longer kneel for the anthem in the future — but do we know why he has had a change of heart?

Examining the effects of the protest

Was Kaepernick’s anti-national anthem protest a worthwhile one?  Kaepernick states that his concerns are being addressed now (hence the decision to stand again), but are we truly clear both about the exact problems he alluded to, as well as the criteria he is using when he states that things are improving?  Without that information, what do we really know?

Most reasonable-minded people acknowledge that Kaepernick was obviously deeply bothered by events happening in the United States when he first decided to kneel, but most people also seemed confused about the specifics of his concerns — and perhaps most importantly, how to measure any positive progress that might take place in response to his protest.  Furthermore, without any specific targets, how would we know when the time would come to stop the protest in an effort to acknowledge the positive changes taking place?

Kaepernick has apparently seen this evidence, but a lot of people aren’t quite sure what metrics he is using.  Are things really better right now, especially when it appears that we are more at odds with each other than ever as witnessed by the deep political divide and ongoing protests around the country?  In fact, it would be reasonable to argue things have actually gotten worse in many ways since last fall, not better.

Some critics will also point to the fact that Kaepernick is currently a free agent, and that his change of mind with respect to protesting the national anthem might be more driven by the need to find a job (thinking he will be more attractive not stirring up controversy) than it is because of positive changes he has witnessed.

What can still be done

What I would like to see is for Kaepernick to do a press conference where he lays out the specifics of what first prompted him to take a knee, the specific targets he had in his mind when he wanted to see “change,” and the measures he has used that directed him to end his protest.  Without that knowledge, how are we to make sense of the protests, and take steps against falling back in to the old patterns that first prompted Kaepernick (and many others) to take a knee?

Regardless of where you stand with respect to Kaepernick’s protest last year, it’s important to respect his concerns surrounding social issues in America today, even if you disagree with the means in which he attempted to draw attention by taking a knee.  The question moving forward, however, is how we improve upon the issues that troubled him, and that we find ways to work together moving forward so that all Americans feel respected and treated fairly.  In examining Kaepernick’s protest nearly a year after it began, I’m still not sure I fully understand the complexities of his concerns, nor am I clear on what specific indicators he used to determine things are better and that he no longer will kneel.  Hopefully in the near future he will speak out about his change of heart and that we will all learn the exact growth measures he saw improve enough for him to end his protest.

What are your thoughts on Kaepernick’s protest, and the positive changes he suggests occurred as a result?  Are social issues better today than when he started his protest?