Cardale Jones Raises Issue of Compensating NCAA Athletes, and his Argument is Tough to Refute 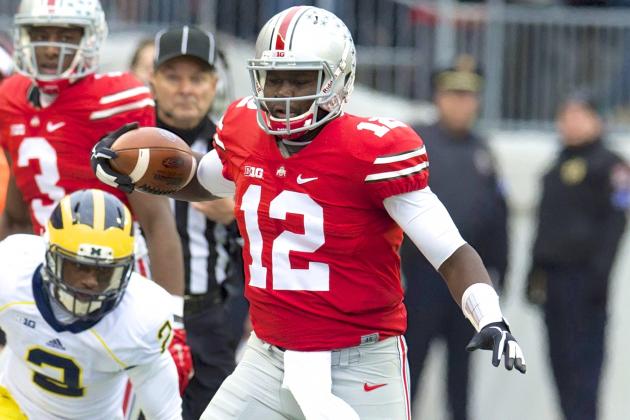 When it comes to the issue of whether amateur college athletes should be paid, the debate quickly divides between the “haves” (the NCAA claims that the free/reduced academic benefits are the real “payment”) and “have nots” (student athletes who feel exploited for all the hard work they dedicate toward making mega-money for the NCAA and member schools).  Former Ohio State quarterback Cardale Jones would fall in the second group based on his Twitter comments Monday, where he specifically mentions his issue with the irony of student athletes not being able to capitalize on their likeness, even though colleges can.

Jones most definitely has an argument here, even if you disagree with him.  Not receiving a direct paycheck in return for playing a college sport is one thing, but cutting off all other ways for student athletes to make money from their likeness is where the issue gets into a gray area.  Some other factors to take into consideration when evaluating the Cardale Jones position include:

The NCAA and member schools have flaunted the wealth they have amassed from the players on the field by spending billions of dollars on new facilities, bigger and better stadiums, and of course, astronomical coach salaries.  Even if you don’t agree with the position many college athletes have regarding being paid, you really can’t blame them for being disgruntled watching everyone get rich except them.

The argument of a free/reduced fee education in exchange for playing college football is also deceiving.  For example, many football players with hopes to play in the NFL don’t enroll in serious college majors, but instead take eligibility courses in order to keep the minimum GPA to play (in fact, countless colleges have been found to be complicit in helping student athletes in this manner).  When student athletes major in eligibility, it essentially eliminates any of the real value in-trade they receive in order for colleges to be able to profit from their on-field production and off-field likeness.

Studies show that only about 2% of all college student athletes will ever compete professionally in sports, an irony of the highest magnitude when you factor in the importance of an education and how it is sometimes devalued into a means to eligibility, rather than the purported original trade of school for sports.

You may not agree with Cardale Jones (and others who share his view), but he does raise important issues worthy of discussion in my opinion.  It also doesn’t help when players like Jones witness head coaches make north of $30,000,000 in their contract like what Dabo Swinney just signed at Clemson (especially when you take into account he only received that contract because of talented student athletes like, ironically, Cardale Jones).