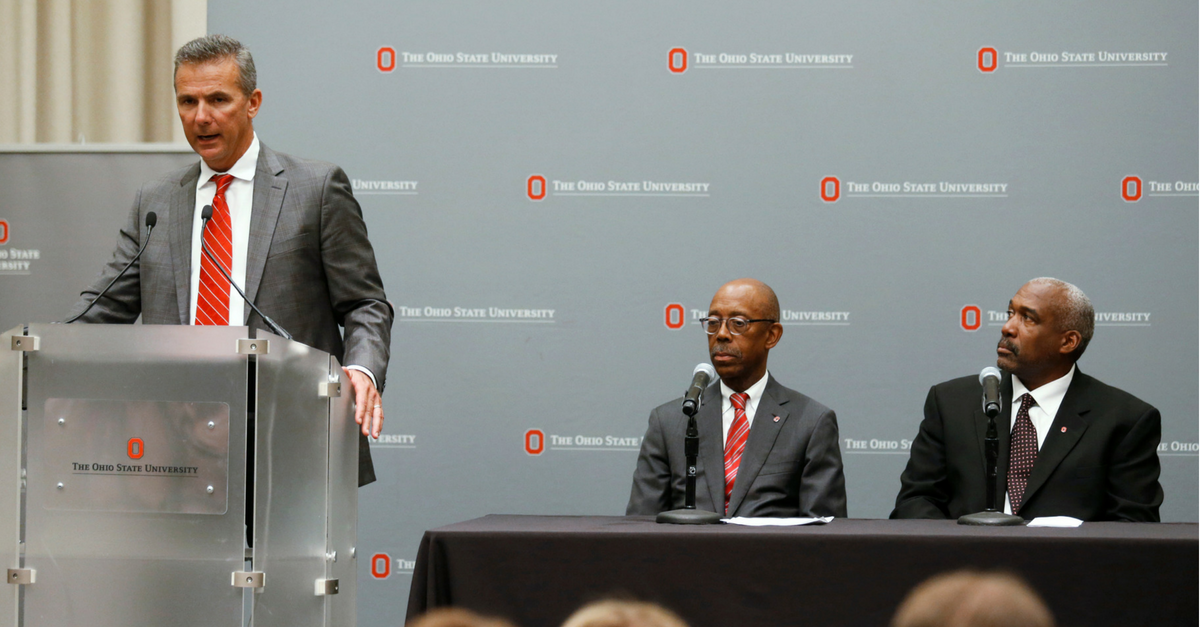 The decision made by The Ohio State University to suspend head football coach Urban Meyer 3 games relating to unprofessional conduct was supposed to be over at the announcing of Meyer’s suspension August 25th.  At least that was what The OSU Board of Trustees, President Drake, and the investigative team expected.  The reality, however, is that the press conference has actually amplified criticism toward Ohio State and Urban Meyer.  In fact, what should be a problem in the rear-view mirror for OSU is only beginning to heat up, as it’s quite reasonable to expect opposing fans in stadiums across the country to make themselves heard in pinning Urban Meyer (and Ohio State) to being tone-deaf to domestic violence.  Critics argue that this was a massive public relations blunder, and an inexcusable one for a university like Ohio State.

Where it all went wrong

The weeks leading up to the decision on Urban Meyer had football fans everywhere talking — most wondered would Meyer be fired or suspended?  As the investigative team wrapped up their case, a press conference was announced for that evening where the country would learn of Meyer’s fate.  The press conference started out rather normal, with a spokesperson for the investigative team succinctly detailing the criteria used to render a decision.  So far, so good.

The next person to speak was President Drake, and while he, too, specifically outlined key discussion points used to determine Urban Meyer’s punishment, a glaring omission occurred right before our very eyes.  Where was the empathy — sympathy — shoot, mere acknowledgement of the main reason why everyone had gathered to examine this case in the first place?  President Drake made no mention of Courtney Smith, Zach Smith’s ex-wife who has repeatedly accused Mr. Smith of domestic violence.  Critics have pointed toward controversial, “he said – she said” evidence that has made it impossible to say unconditionally that Courtney Smith was a domestic violence victim (even with clear pictures of physical abuse), but even if you are uncertain of who caused domestic violence, is there any question that domestic violence occurred??

Domestic violence is defined as violent or aggressive behavior within the home, typically involving the violent abuse of a spouse or partner.  No place in the definition does it state what gender has to be responsible for domestic violence, only that violent abuse of a spouse has occurred.  Keep in mind there have been numerous police reports, pictures, and even partial admissions that fights regularly happened — and yet President Drake doesn’t even acknowledge, much less empathize with, victims of domestic violence?

And it just got worse from there…

Next was Athletic Director Gene Smith, who also blew right by the issue of domestic violence and instead turned his attention toward Buckeye Nation.  No acknowledgement of the marital problems that landed on Urban’s desk, the physical violence, or the horrors of domestic violence, and no sympathy offered for those who might have hoped for positive growth to occur in the aftermath of an ugly situation.  There was no focus directed to domestic violence in what would have been at worst a nice talking point diversion from an uncomfortable press conference, to at best a teachable moment to mitigate future crimes from occurring.  And if you had expected that Ohio State was going to make a charitable donation toward domestic violence groups, you would have yet again been disappointed.

Finally, it came time for Urban Meyer to speak.  In what should have been an opportunity to respectfully acknowledge victims of domestic violence (including Courtney Smith), Meyer instead ignited the start of a post-conference movement questioning his full understanding of the situation.  Critics have already talked at length about how Meyer appeared to be bitter and upset to be in the situation and not the least concerned about the domestic violence accusations, but it is still shocking weeks later that he couldn’t even mention Courtney Smith’s name.  Ask any parent what they most hope for when disciplining their children and the #1 answer you’ll hear is that their kid “gets” what happened, understands the serious nature of the crime, and appears to learn how to behave differently and better for the future.  Did anyone come away with that feeling listening to Meyer speak?

This should be over, but it may just be getting started

Amazingly, The Ohio State public relations department somehow overlooked or purposely avoided having Drake, Smith, and Meyer speak directly to the main reason the entire investigation took place – domestic violence.  Had the press conference directed some attention toward domestic violence, there’s a good chance this story continues to fade away.  Unfortunately, that’s not what is happening, and you can easily make the case that their problems have only grown since August 25th press conference disaster.   The press conference was supposed to be damage control, but in hindsight it has triggered even more concerns around whether anyone at Ohio State grasps the seriousness of domestic violence.

The 2018 Ohio State domestic violence case should be included in future sport sociology textbooks, as it’s a perfect example of what not to do when serious charges are asserted against your university.  How such glaring omissions to merely recognize the seriousness of domestic violence by three of the big players (Drake, Smith, and Meyer) appears to have either been intentional by design, or an oversight blunder that never should have happened.  It’s not being “politically correct” to display empathy toward victims of domestic violence, it’s just the right thing to do —- and it shouldn’t be too difficult to offer sympathy to those who could have truly benefited from a better Ohio State University on August 25th.