Examining the Impact of Player Protests on NFL Ratings Decline 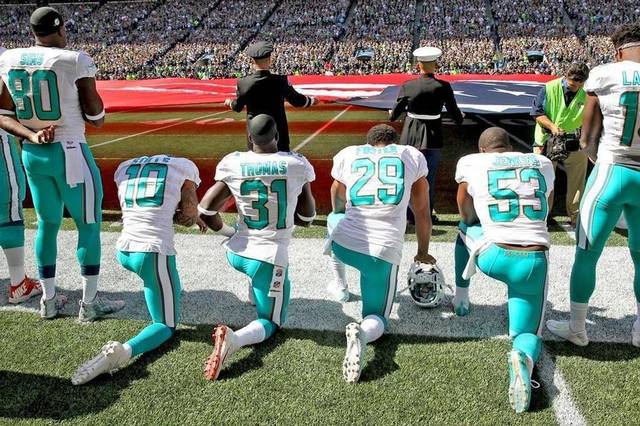 The NFL is witnessing a big decline in ratings this year, and reasons for the decline vary from unexciting prime-time matchups, presidential debate interference, and, of course, the controversies surrounding players engaging in national anthem protests.  Interestingly, a recent Yahoo poll revealed that player protests were, in fact, the #1 reason why fans they are staying away from watching games (and by a big margin).

Athletes & the power to make change

Athletes have always had visibility and a platform to voice concerns over social and cultural issues in America, but the current kneeling-protest (as well as other derivatives) seems to have struck a nerve different than awareness protests from the past.  Contrast the current breast cancer awareness efforts to gain fan attention by wearing pink to the Kaepernick-led national anthem protests and you will immediately witness a very different perception, tone, and opinion.  While breast cancer awareness soars in October, the ongoing kneeling protests seem to have lost some of its sizzle and become more of a burden and distraction than a call for fairness and equality (as evidenced by the reasons for the decline in ratings identified by the Yahoo poll).

Many people I have talked to about these protests say roughly the same thing — there is definitely a need to more closely examine race relations in America, but that disrespecting the flag is not the way to go.

How to measure “change?”

Regardless of how many times Kaepernick (or his followers) state that their protests are not designed to disrespect veterans, it’s clear by now that the message simply isn’t resonating with many Americans who prioritize unconditional patriotism.  In fact, in a previous blog I voiced my own concerns that without specific, identifiable targets, how do we know if change is actually occurring right now, or to catch improvements made over time?  To simply take a knee because issues need to be addressed may be attention-getting at first, but I’m not sure it’s the long-term solution to the problems NFL players have identified without specific objectives that can be measured.

There is a real risk of potential long-term damage to the NFL and its brand unless they make proactive efforts to remedy the distractions the kneeling protests have had and the impact on the NFL fiscal bottom line.  The guess here is that NFL officials are spending increasingly more time each day closely examining the nature of the protests, what can be done to make positive change in America, and how to bring the protests to a peaceful and unifying end.  I would imagine team owners are also having their own in-house meetings about what they can do to bring a peaceful close to the protests, and hopefully regain the previous level of fan interest witnessed before the protests.

What we are seeing here is very different…

Fans have always stuck with the NFL in the past, even when they have been upset with player off-field problems and discretions (i.e. players breaking the law),  as well as general safety concerns around football (i.e. concussion risks).  But what we are seeing here in response to the player national anthem protests is something very different for fans (they are protesting the protests, essentially), and as these protests carry on with no end date in sight it’s quite reasonable to expect even further NFL rating declines in the near future.  Sadly, the fan protest we are now witnessing has steered us away from what was originally an important issue (race concerns) in the United States, suggesting that perhaps now is the time to reel things in and hit reset toward solving the problems identified.