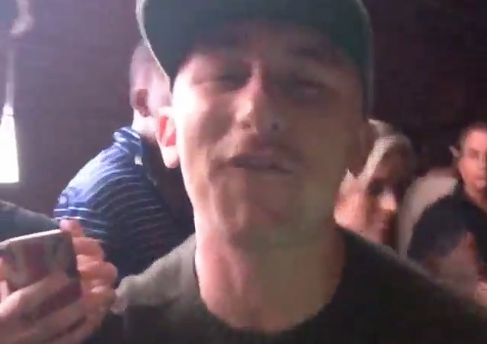 Time is running  out on Johnny Manziel, prompting him to throw a final Hail Mary pass by hiring the brash and outspoken Drew Rosenhaus to help jump start his NFL career.  Super agent Rosenhaus will need to convince NFL teams that Manziel is a low-risk, psychologically stable and physically talented QB worth the risk.  Unfortunately, any potential that Johnny Football still has for the game is quickly vanishing — his NFL stats to date have been mediocre at-best, and his off-field issues have only mounted.

Since the end of the NFL season Manziel has been dropped by both his former agent and team, each pointing toward his off-field lifestyle as the primary reason for cutting ties.  Rosenhaus is now faced with rehabilitating Manziel’s image enough to entice NFL teams that he is worth the risk, yet seemingly every time we see Johnny Football he is still out partying or getting in trouble with the law.

Is he getting better?

From afar, it does not seem as though Johnny Manziel has taken any real, serious steps toward bettering himself from what got him to this point in his life.  Countless people, including family members, his former agent, friends, and teammates have expressed very serious concerns about his well-being and focus, and yet nothing seems to have resonated with Manziel enough to change.  Couple this with the fact that the average length of an NFL career is only 3.5 years, and it’s reasonable to suggest that the window was closing on Manziel even without the off-field issues.

It’s virtually impossible to slap together a haphazard team/scheme to make it in life while simultaneously bypassing the real problems.  Manziel’s hiring of Rosenhaus might grab headlines for a few days, but in the end all the attention in the world won’t be a substitute for a guy who appears to be completely unprepared to handle the responsibilities of being a professional football player.  Rather than hiring a famous football agent to resurrect his career, I think talent evaluators would have liked to have seen more evidence of Manziel cleaning up his life evidenced by less TMZ coverage, another mental health rehabilitation stay, and anything else to show that he is less invested in partying and truly focused on football.

The prediction here is that the sand is going to leave the hourglass when it comes to Manziel’s NFL window of opportunity before he gets things squared (if he ever does get better, that is).  To date, Manziel has not shown any real signs of improving his lifestyle choices or seriousness toward becoming a professional football player, and now there is little time to do so.  Having never established any real foundation for himself, he is now left scrambling for anyone or anything to help him get one more last shot.  Even if Drew Rosenhaus plays a favor-chip and gets a team to give Johnny Football one last look, does anyone really believe things will suddenly be different?