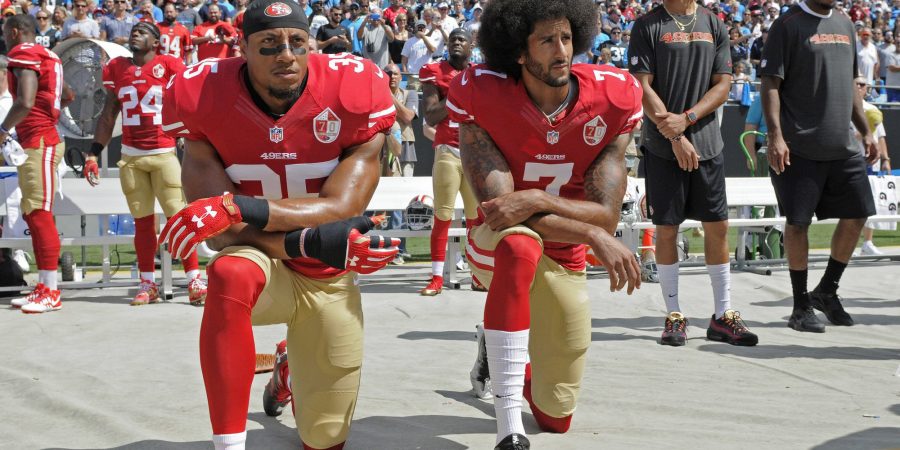 Colin Kaepernick’s kneeling for the national anthem protest has kick-started a national movement of other athletes following suit, prompting Americans everywhere to examine race issues and related problems.  In the weeks that have followed Kaepernick’s initial kneeling, we have seen athletes of all ages and skill levels demonstrate similar protests, leaving people to wonder what will become of all the attention turned toward perceived inequalities in the United States?

There is no doubt that Colin Kaepernick feels there is an unjust in our country toward minorities, and even for those who disagree with his position these demonstrations have at least prompted a wider discussion regarding race in the United States today.  When I am asked my opinion on these protests I generally frame my answer in the following way — is what he (and others ) are doing legal, and are these types of protest the most effective way to attract attention and promote positive change?

I’m not a lawyer, but the first threshold I examine while watching these national anthem protests is whether anyone is breaking the law?  Free speech is for the most part “free,” but there are limitations (we are prohibited from inciting panic by yelling “fire” in a theater).  While some fans have voiced their displeasure and called this movement unpatriotic, there is nothing illegal with taking a knee during the national anthem.

Another concern that has been raised is whether athletes have the right to protest while being paid by their employer (professional football team), or representing their college or high school?  To date, we have seen some team owners express their concerns, but they have refrained from stopping athletes from taking a knee.  I am unaware of any college or high schools prohibiting their student athletes from protesting the national anthem, though it is possible some schools have attempted to prevent these demonstrations from occurring.

After agreeing that it is an American right to protest the national anthem, my next set of questions pertain to the effectiveness of such a movement?  Kaepernick’s stance has certainly gained worldwide attention, but beyond that there are differing opinions about this move pertaining to the following:

A.) Is this the best way to raise awareness and start change?

B) Are the variables clearly defined that are targeted for change?

C) Is there a way of measuring any progress toward “change?”

D) Is this movement sensitive to those (including racially diverse people who work as police officers who commit to fairness and professionalism, and veterans who have served this country) who see these protests as offensive?

E) Now that the attention is there, what other means might be examined to better spell out the exact concerns that need to be addressed and improved upon?  Rather than kneeling silently, will athletes begin to more regularly vocalize their hopes by means of press conferences and other similar ways?

The longer these protests go on there will inevitably be even more layers to cut through as it applies to the success of the movement, the means in achieving success, and the effect on both those who feel racial inequality in this country, and those who may see things differently than the protesters.  Sports have always been intertwined with social issues (the 1968 Olympics) and religion (Jewish players who have conflicts playing on religious holidays).  Athletes, therefore, have a voice and a platform, but how they use their visibility and microphone can vary dramatically.  With the current Kaepernick-kneeling movement, the jury is still out, with more questions and complications on the horizon as they apply to the success of taking a knee.