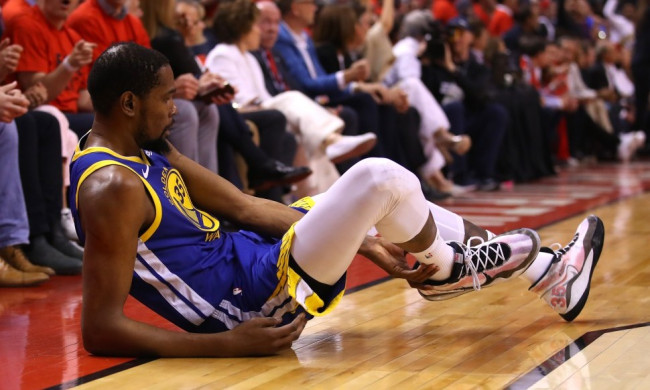 Kevin Durant will go down in basketball history as one of the greatest to ever play the game, but as of this moment his career hangs in the balance.  Durant re-injured his Achilles after making a brief, dramatic re-appearance in the NBA Finals last night.  While Durant’s courage was admirable, the decision to play, in hindsight, could lead to future physical and mental hurdles to overcome — and even the threat of a premature sport retirement.

When an athlete experiences an injury there are often many immediate concerns to address, including pain management, the rehabilitation schedule and process, loss of a routine and support system of teammates, and challenges with confidence when the athlete is eventually approved to play again.  Ironically, the pain associated with sports injuries often subsides in short time, but the mental ramifications last much longer — and sometimes indefinitely.  Making things even more complex is that mental wounds, unlike physical scars, aren’t usually visible and therefore don’t command attention from others.  For example, you can witness an athlete limping and wincing with each step, providing clear evidence the athlete is in pain.  What we don’t always “see,” however, are signs that the athlete is anxious, depressed, or using ineffective and unhealthy ways to cope with the stress associated with the injury.  Sadly, it is often these missed mental issues that compound problems, impact recovery, and sometimes serve as the primary reason why the athlete never get back to playing at their previous high level again.

Coming back to soon can severely hinder future confidence

When an athlete who struggles to rehabilitate an injury comes back too soon (as what critics are saying about Kevin Durant), the re-injury can be exponentially more difficult to manage.  Practically speaking, it takes a lot of mental energy to adhere to rehabilitation and take the first step back to playing again, and as you might imagine there are often a lot of insecurities during this process.  What happens if I don’t feel right?  What if there’s a lot of pain?  What will happen if I make sharp cuts?  These questions are very normal, and as the athlete experiences the success of playing well after the injury the questions generally diminish.  But what happens when only moments after returning and asking those questions the athlete experiences his worst nightmare and hurts himself again, as what just happened to Kevin Durant?  The answer is all those questions compound, leading to even more anxieties and insecurities.

Injuries are tough to overcome, and dealing with a re-injury is even tougher.  It takes a ton of mental energy to get ready to play again, and when the worst nightmares of getting hurt again become realized the consequences can be devastating.  If you are a sports parent or coach it’s important to understand that there’s a lot more to sports injuries than just rest, ice, and bandages, as a lot of the stress is experienced emotionally and without much warning or evidence.