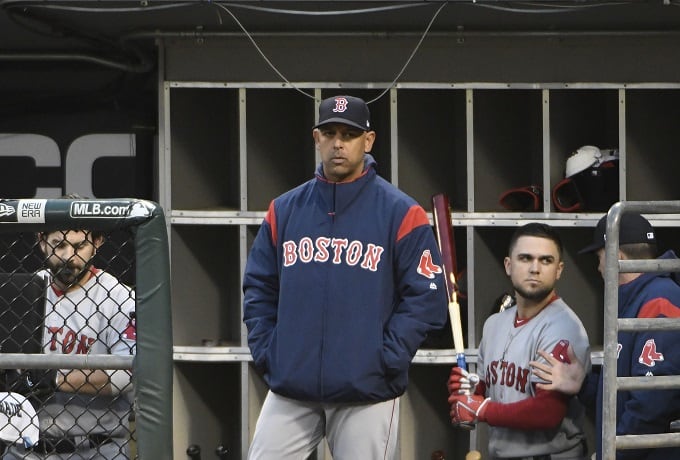 Last week the Boston Red Sox were the latest team to visit President Trump — well, at least some of the team made the trip.  The Red Sox players and coaches who visited Washington followed other championship teams in recent years (Washington Capitals, Philadelphia Eagles, and Golden State Warriors), but also included many noticeable absences of players and coaches opposed to the current president – including Red Sox manager Alex Cora.  At least for now, the days of an entire team making the trip in unity to the White House are over, but what are the consequences for a sports team when political differences are no longer hidden, but instead dramatically amplified?  When teammates learn that some support the president enough to attend, while others dislike him so much they decide to not attend, do these now stark and observable differences lead to eventual clubhouse problems that might not have otherwise?

It used to be that politics and religion were private topics, and people generally kept their beliefs to themselves.  Previous generations of athletes followed these unwritten rules, as about the most political thing witnessed was the National Anthem.  The moments where politics or religion surfaced were, for the most part, universally accepted without much attention or problem (i.e. Major League Baseball witnessed God Bless America sung at the 7th inning stretch in stadiums across America after the 9/11 attacks with great unity).   Maybe we were a more united nation then, maybe players were simply more compliant to general expectations, or maybe the lack of social media then kept would-be problems underground.  While there have always been problems in America, few bled over to the sports arena in ways that potentially split teams apart – until now.

Visits to the White House

Champion athletes and sports teams have always visited the White House, and after some hand shakes and pictures these events came and went without much fanfare or controversy.  We can assume that not every player who visited the president was a fan of his policies, but I can’t recall any protests or rejected offers from players.  Today, however, increasingly more players are taking a stand and saying ‘no’ to making this traditional visit to the nation’s capital.  When players decide to forfeit their invitation the media jumps on the story, especially when the players are famous — like Steph Curry.

For a moment, put aside the politics of why players don’t go and instead ask yourself if you think these decisions impact team culture?  In other words, when players see their teammates embrace a president that they see as being very opposed to their values, can these players still play together and have each other’s backs?  Taking the current Red Sox visit as an example, how must Alex Cora feel when he watches some of his players embrace a president that Cora sees as slow to help Puerto Rico, his native land?  When entire teams accept or reject their invitation to the White House these individual differences go unnoticed, but matters change when support for and protests against serve as dividers for a team.

We can assume that future championship teams will be invited to the White House, and that there will likely be division when it comes to who will attend and who will decline.  Will teams begin to take greater note of how one another respond to these invites, and will there be unforeseen team cohesion problems that follow based on these decisions?  It’s tough to imagine how the decision to go or not go doesn’t have some effect on team dynamics, and possibly even eventual on-field success.