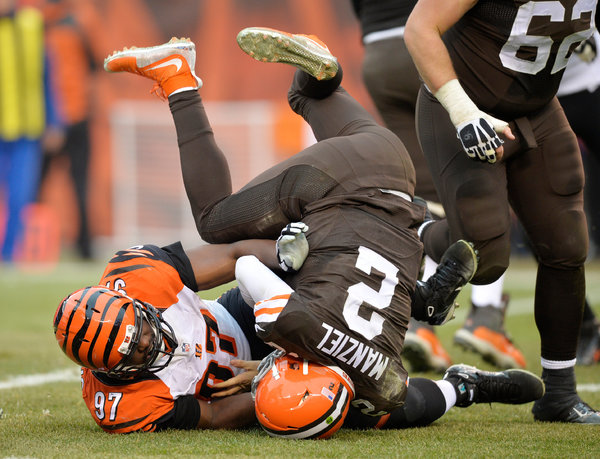 If you are frustrated by the latest Johnny Manziel partying news, you can only imagine how the Cleveland Browns feel right now.  After risking 1st round pick on Manziel in 2014, the QB has hardly provided much return on the investment, and now he looks like he may not make it to the end of this season if the rumors about his pending release prove to be true.

Even though Manziel has a Heisman trophy on his resume, and a bigger-than-life personalty that could be a major asset to a team looking to improve ticket and apparel sales, Manziel has been anything but a positive influence in Cleveland from day one.  Not being prepared to play when he got his chance his rookie year, a 3-month stay in rehab for never disclosed reasons, and ongoing, random drinking and partying pictures are what most people think of when it comes to Johnny Football.

Now, time is running out.  With the average NFL career length a mere 3.5 years, Manziel is quickly approaching borrowed time — and provides no evidence that he will make it to the end of the season, much less make it 3.5 years.  While it is true talented people in life are often given countless chances to overcome problems and adversity, Manziel has yet to prove he is in that group of select individuals based on his pedestrian-like NFL performances to date.

Does Manziel struggle with substance issues, maturity issues, or entirely different issues altogether?  There are as many theories floating around describing Manziel’s actions as there are reporters and fans, but the reality is that finding the true cause for his lacking responsibility is something we can only speculate about from afar.  Regardless the reason(s), the clock is ticking and with each day that passes Manziel will find himself in even more difficult challenges simply trying to stay on a team.

Many of the incidents reported to date are nothing more than a young man enjoying his celebrity, and not much different than what other what talented athletes his age are doing.  The unique problem Manziel, however, is two-fold:

If the NFL window for employment wasn’t so small, you could make the argument that after Manziel finally comes around to figuring it out he’ll end up recharging his career down the road.  The problem, however, is that by the end of this season he will be past the half-way point of an average NFL career length, and has hardly had enough on-field experience to show any kind of real measurable growth toward him one day becoming a viable QB option for an NFL team.  Making things worse is the fact that every spring a new class of promising college QB’s become draft-eligible, many with more upside and far less baggage.  None of this, of course, bodes well for Johnny Football.

The stars are not lining up for Manziel these days — the Browns are bad, and Manziel shows no signs of providing any real hope for the future with his emphasis on partying and his lack of respect toward his employer.  Basically, Manziel doesn’t look like he’s interested and prepared to lead, even if deep down he feels that he can.  Like it or not, perception goes a long way in life, and the perception of Johnny Football right now is that he’s much more into the party scene than he is in turning his team around.

Opportunities don’t stick around forever, and perception really does count in life.  Johnny Manziel’s football future hangs in the balance, and his career is on life support — hopefully he figures some things out very soon.