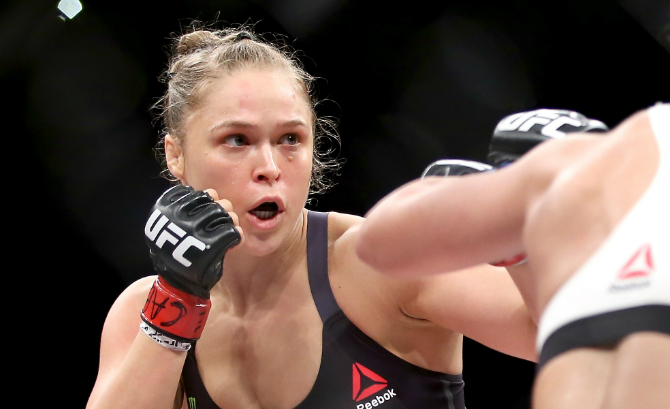 Earlier this week Ronda Rousey disclosed that she was thinking about suicide in the aftermath of her unexpected MMA loss to Holly Holm last November.  Rousey not only lost her first fight, she was also quickly stripped of her championship belt and all the attention and accolades that come with being on top.  Essentially, Rousey went from the toughest fighter on the planet to a fighter suddenly contemplating retirement.

Sport retirement is often an incredibly difficult transition for elite-level athletes, particularly for those with a high degree of athletic identity.  Countless sport psychology studies have shown the more an athlete exclusively identifies as “athlete,” the less ready he or she will be when faced with the prospect of sport retirement.

A person’s identity is the way in which he or she defines him- or herself.  For athletes, the dominating identity is often “athlete,” meaning the world is viewed through the athlete lens and all thoughts and actions revolve around athletics in some way.  Compounding how an athlete views him- or herself is how the world views the person — this is called your social identity.  In the case of athletes like Rousey, both her self- and social-identities revolve around being a world-class MMA fighter, leaving her vulnerable for meltdowns like the one she had after the Holm fight.

When athletes are forced to exit sports and move on to non-sport careers, the task of starting anew can be daunting.  Often without a resume, job experience, education, or the knowledge needed to successfully begin a new career, athletes will sometimes succumb to depression, anxiety, substance abuse, and even suicide.  It’s easy to have empathy toward athletes going through a difficult sport retirement transition as they didn’t “do this to themselves” by running into a tough retirement, but instead were products of being so dedicated to their sport that they essentially couldn’t develop other, non-sport career paths at the same time.

Ronda Rousey’s brief suicide thoughts are not uncommon for elite-level athletes, as thoughts of little self-worth beyond sports often cloud judgement and throttle insecurities during moments where retirement seems imminent.  Fortunately, while many athletes have dark thoughts near the end, few actually follow through and most do, in fact, rebound to have successful non-sport careers.  Lets hope the same is true for Ronda Rousey, who appears to have many more talents than simply fighting in an octagon.