The Sports Doc Chalk Talk
Subscribe
Home / Blog / Where Does the Kneeling Movement in Sports Eventually End Up?

Where Does the Kneeling Movement in Sports Eventually End Up? 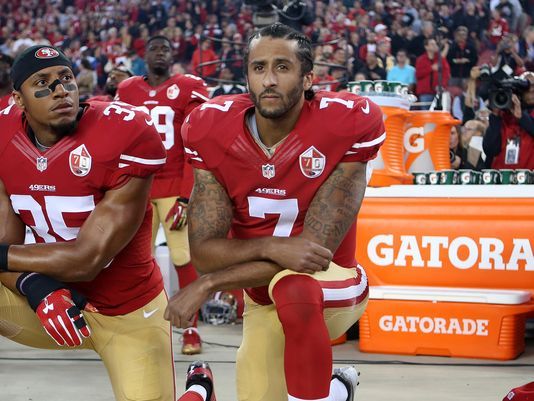 What started out last year as a single man’s protest against racial and social inequalities in America has now morphed into legions of athletes nationwide taking a knee for the national anthem, including youth athletes and even some cheerleaders.  Colin Kaepernick is recognized as the first person to protest the flag, and now a year later the number of protesters seems to grow by the week.  Recently, President Trump threw more gas on the fire by demanding the NFL owners fire players who kneel, prompting a shift in the original movement centered around race to many players now protesting Trump directly (for his views on race as well as other controversial opinions).  Ironically, while Kaepernick isn’t even employed at the moment, the movement that grew from his actions has gotten significantly stronger, and at the moment the country even more divided.

A starting point to the analysis

If you believe in the 1st amendment, then you have to support a person’s right to kneel before the flag.  Unless there are future changes to the constitution, you can currently only say you find the kneeling protests in bad taste, but you can’t say that it’s illegal.  Moving on….

Many Americans weren’t quite sure what Kaepernick’s original protest was about, especially since he made infrequent appearances at press conferences to specifically outline not only his concerns, but also the means in which Americans can right a bad situation.  Some Americans immediately assumed Kaepernick’s concerns were about Black Lives Matter (BLM), while others interpreted his protest using a wider view to incorporate all minorities and people who feel oppressed and/or discriminated against.  To date, we still can’t be precise trying to answer these questions as Kaepernick is rarely heard from, and many people protesting today have used the original kneeling platform to mean something different from Kaeprnick and unique to themselves.  Simply put, the movement has grown, modified, and changed in some ways.

Though the kneeling movement was not originally viewed as a means of galvanizing athletes from all sports, after the president made his most recent disparaging remarks athletes have become very united — and this trend seems to be moving from football to other sports.  In fact, it seems as thought the more Trump lashes out, the more athletes are coming together and speaking out – including white athletes.  Rather than displaying empathy and trying to fully understand the kneeling movement, Trump has doubled-down at every turn, and the gap in political/social views has widened by the day as a result.

Kaepernick’s original kneeling certainly raised awareness, but did it promote actual change?  According to Kaepernick he did intend to stand for the anthem this year, but as of today he still isn’t signed to a team.  It would be interesting to learn from him exactly what happened since last year to prompt him to stand this year, or if his intention was simply to raise awareness and he felt that his kneeling did just that?

While we may not be quite at the apex of the kneeling movement just yet, it does seem as though the movement is close to a tipping point and ready to change course.  Hopefully future change will be for the better, and that this past year’s worth of protests can result in a better understanding of the problem from both sides.  There are deep, important discussions that need to be had, and important roles for prominent athletes to play so that they can serve as positive, productive role models as we adapt to changing societal views.  This isn’t so much a question about “right and wrong,” as much as it is about changing times and respecting views (especially those different from our own, regardless of what side of the issue you take).  Athletes like LeBron James, Colin Kaepernick, Steph Curry, and countless others can help lead here — and of course, the president can certainly do a better job, too.  The hope here is that better minds prevail soon, and that positive outcomes are the end result from the kneeling protests.